Posted at 14:09h in Hospitality and art by nicoletta
Share 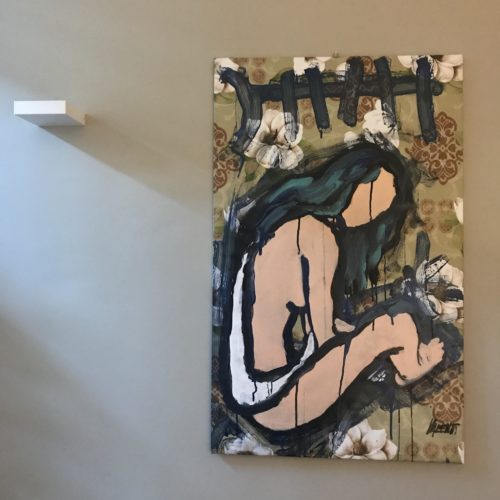 Andrea Valenti was born in Siena in 1967. He studied at “Paolo Toschi” art high school in Parma and then got a degree in architecture from Politecnico di Milano. Since 1995, after a long journey in in the Amazon, he abandons the profession of architect to entirely devote himself to painting. He exhibits at Centro Sociale Livello 57 in Bologna and on the street, spreading his paintings on the ground in Los Angeles, New York and London.

In 2004, he is selected among the finalists of the Premio Arte Mondadori and at the XVII edition of the Treccani degli Alfieri competition.

In 2012 Andrea Valenti wins the live painting competition Muri Liberi and, in ex-equo, also the first edition of Art-libre sui Muri del Convento, at Convento dei Frati Cappuccini in Reggio Emilia. In 2014 he wins the first prize of the AnspiArte competition.

He collaborated with the galleries: Common Room Gallery in London, Gewo Gallery in Marburg (Germany), MAC in Milan, De Marchi in Bologna, 8.75 Vetrina in Reggio Emilia, L’Ottagono in Bibbiano (RE), Raisart Studio in La Spezia; Andrea Valenti is now cooperating with the Trip Gallery in Brescia.

Andrea Valenti lives in Parma and has his own studio at the “Cubo” in Via La Spezia, 90.